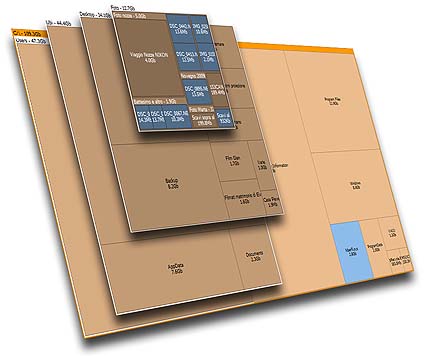 I found a great new app on the weekend to find out what is using up all your disk space, and I’ve used it about 3-4 times since. It’s called Space Sniffer.

I’m not sure where she found it, but Bernie recently discovered this great website: fishpond.com.au and they sell books online at great prices and ship them within Australia for free.

We’ve bought a few, and the service is great. you can search their site from here:

The last couple of weeks I’ve been reading (listening to) Book Yourself Solid by Michael Port. This an excellent book full of step by step processes for the “service professional” to get you as busy as you want to be. There is a great workbook that goes along with it, that I haven’t yet delved into, simple because I’ve been listening in the car, where it’s hard to write in a workbook.

The layout of the book is excellent, stepping you through the process of building the foundation of your business, building trust and credibility, and the 7 core self promotion strategies. What I really love though, is that it’s not done in a smarmy, selling kind of way, but an authentic look at how to build your skills in an area, and then genuinely put yourself in front of people who need your services.

You can buy the book online from either of the links below.

Note, this is a general ramble more than a review, but what do you expect at 4am. There are no real spoilers below.

It’s really tough to rate the last movie in a trilogy, simply because there is always the sadness of the fact that the story is coming to an end, and the long awaited conclusion to The Matrix was no exception. Don’t get me wrong, it’s a great movie, and, like it’s predecessors will bear many a re-watching, but I felt it lacked something of what the others had. Maybe because less of the movie was in the Matrix itself, I’m not sure.

The fight scenes were, of course, excellent, and the story, though reasonably predictable had enough to keep me guessing how” if not “”what”” was going to happen. Some of the dialogue was a easy to pick too, but maybe I’m just good at finishing other peoples sentences. Oh, and when you see the squidies pour in, my brain immediately screamed Galaga, which was kinda funny.

All in all, a great movie, bringing a tear to the eye, a laugh and some very enjoyable action.

While we were testing the 2.4GHz P4, this little number from VIA arrived, and given it features the VIA Apollo P4X266A chipset, arguably a direct competitor to the Intel 845 chipset, we felt it would be interesting to compare it to the D845BG.

Admittedly the VIA motherboard has a couple of extra features, notably the integrated Promise IDE RAID controller but to be fair we did not include this in the performance tests. Obviously to kit the VIA up with multiple RAID drives would grant it a marked advantage in the hard drive performance stakes.

Other than being slightly deeper the P4XB is around the same footprint as the Intel and displays comparable care in design and workmanship. All internal connectors are sensibly located and the board boasts three DIMM slots, one more than the Intel, AGP 4x slot, five PCI slots, one less than the Intel, and a CNR connector of which the Intel has none. The P4BX’s memory ceiling is claimed to be 3GB while Intel’s is 2GB, both feature ATA 100 and USB 1.1 although Intel does have versions of its D845 motherboard with the much faster USB 2.0.

Where the P4BX does have an enormous advantage of the Intel D845BG is in BIOS tweaking. Intel do not really want you playing around and overclocking the CPU and memory, but as far as VIA are concerned it is all threre to be tinkered with.

Ok the P4XB’s advantages of RAID and overclocking aside how does the vanilla system perform when compared to the identically configured D845BG. The quick answer is pretty much on par. Overall performance in Winstone for example is within 2% with the P4XB 98% of the Intel’s score in Content Creation Winstone. In 3Dmark 2001 it’s a photo finish with the P4XB just 0.2% behind the D845BG. As far as compatibility is concerned we did not experience any problems but then given this was not an exhaustive comparison the compatibility testing carried out was rather limited.

It would however be fair to say that the VIA P4BX motherboard would be a viable alternative to the plethora of I845 boards on the market for your corporate workstation.

Riddle of the Sphinx is an excellent use of the Quicktime VR technology to explore the ancient pyramids.
The game plays quite well and has very low system requirements (P166/32Mb). The game is visually splendid and mentally challenging, with many puzzles to solve and objects to manipulate.
There are the occasional annoyances where you can’t go where you think you should be able to, but overall the game is a lot of fun.There is a patch that needs to be installed to make the game run on some systems (we had this problem on one system we played on.)

Steve was looking through a catalogue the other day when he found a small USB cable that you can plug into your desktop/notebook and use it to charge your Nokia mobile phone batteries. It only costs about AU$15 and is available from Innovision

It is the perfect thing to keep at work to charge your phone, or to take on holidays. I’d much rather carry it than the bulky 240V charger and I can just plug it into my laptop when the phone needs a charge.
picture

No, This is not a typo, this is a sequel to Alien. The second film is much better than the first, probably due to the direction of James Cameron, many of whose movies I love.
I think I saw this one too, many years ago, but I only remember bits of it. It is possible that I got the edited shorts from it with the aid of a friend of mine who now calls himself Meridian.
All that aside you have the same lead character, the same alien (lots of them) and the same planet, but also a bunch of new characters (good & bad). I quite enjoyed this, but the atmosphere can really be too much. At one stage in the movie all the light go out (coz the power got cut of course) but at the same time, in the office beside me there was a whir, a click and movement beside me. By the time I climbed back down off the ligh fitting, i realised it was mearly the Red Hat install beside me asking for the second CD, but it took me several minutes to calm back down before I could watch the movie again.

I havent seen this movie since I was about 14 or so, and it scared me death back then. Then there was the Alens TC for Doom during the good old days. Now the movies are out on DVD and you can get a five pack (the four movies plus a DVD of extras) which I have been leant by my boss, Steve.
This is still a scary movie, and the effects are still fairly good, even today. I thouroughly enjoyed watching it again, and I was surprised how little I remembered, and how frightened you can be in a well lit loungeroom.

This was an excellent little techo-geeky thriller. Unfortuneatly I saw the last 20 minutes or so before I saw the start, but I have to say I still enjoyed it again, and having the chance to watch Bern, Mon & Jase was good too.
The plot was good, and I liked the acting (thought I rrarely dislike acting, I suspend disbelief too well). The whole Microsoft/Nurv” thing was a bit close, but they made light of it early in the movie which was kinda fun.
There were a few nice twists, an Mon, in particular, was right on the edge of her seat for the last half.